Group photo with the guests at the main event venue

At the event in the Project’s site office, Mr. Lu Xiaofei, President of Pan-Asia Group, gives the firstspeech and expresses his warm welcome and sincere gratitude to all the guests and parties for their strongsupport for the Project. He points out, "The official launch of piling for the Phase I PET plant marks thatthe Project enters a new stage, comprehensive construction. Such achievements result from not only theunremitting efforts of the Pan-Asia people over the past three years, but also the continued support andhelp from the government authorities of all levels in China and Saudi Arabia, and the Project’s partners.Since the Project’s inception, we set the standard that the project’s technologies must be high in qualityand low in consumption. The technology adopted by the Project, i.e. P8 plus PTA technology fromINVISTA, PET technology from Kunlun, SSP technology from Bühler, are the most advanced in theworld. With such technologies and technique capacity of the Pan-Asia team, the Project will feature lowenergy and material consumption and excellent environmental properties when built up and will becomea modernized, efficient, environmentally-friendly and high-standard factory with no waste water or wasteresidue discharge. Pan-Asia will continue to promote the work spirit of 'grasping every minute as timeawaits no one', and fully utilize the Chinese speed in project construction and the resource advantages ofSaudi Arabia, to develop the Project into a model project for China-Saudi Arabia production capacitycooperation, adding glory to the G20 Leaders' Summit in the Kingdom next year." 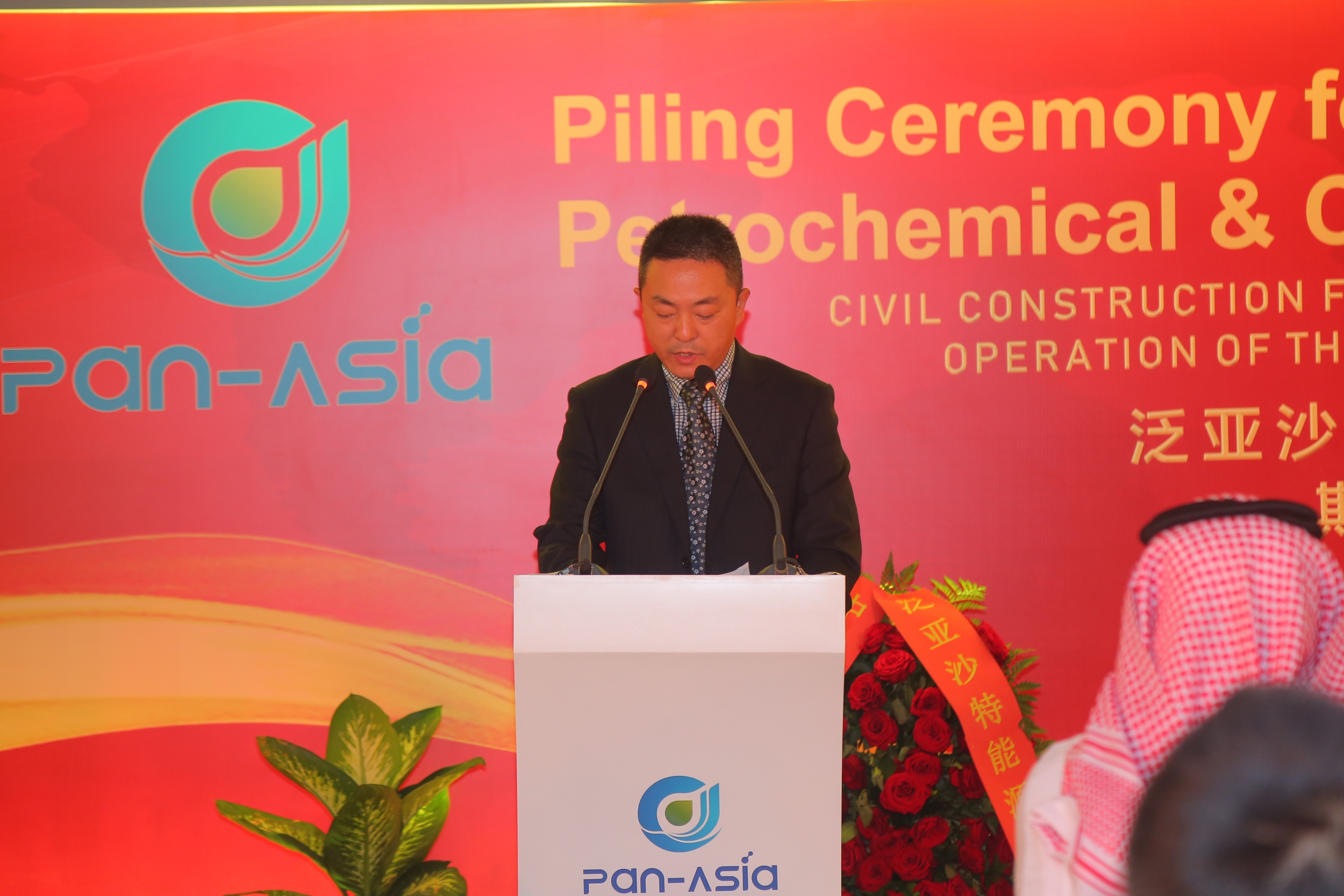 Mr. Wu Yubo, General Manager of China Kunlun Contracting and Engineering Corporation, states, "Asa renowned engineering company in China that adheres to innovation and services, since its founding in1952, Kunlun has been devoted to making technological development for textile-grade chemical fiber,synthetic materials, aromatic hydrocarbon engineering and environmental engineering, etc., and hasundertaken numerous breakthrough projects on the national level. It owns proprietary technology andwhole-set equipment in large continuous polycondensation, PTA, diesel conversion to aromatichydrocarbon, and so on; wins high-level awards for many times including National Scientific ProgressAward, and has good brand reputation and market status. As a long-term partner of Pan-Asia Group,Kunlun will continue to contribute to the high-quality development of Pan-Asia. Having traveledthousands of miles for this ceremony, we are here to strengthen the confidence of all sides, to which theRed Sea is the testimony. With promotion of Pan-Asia, support of Saudi government authorities, andjoint efforts of all construction partners, the Pan-Asia Saudi Project will surely become a model projectfor Saudi Arabia, adding glory to the G20 Summit next year!" 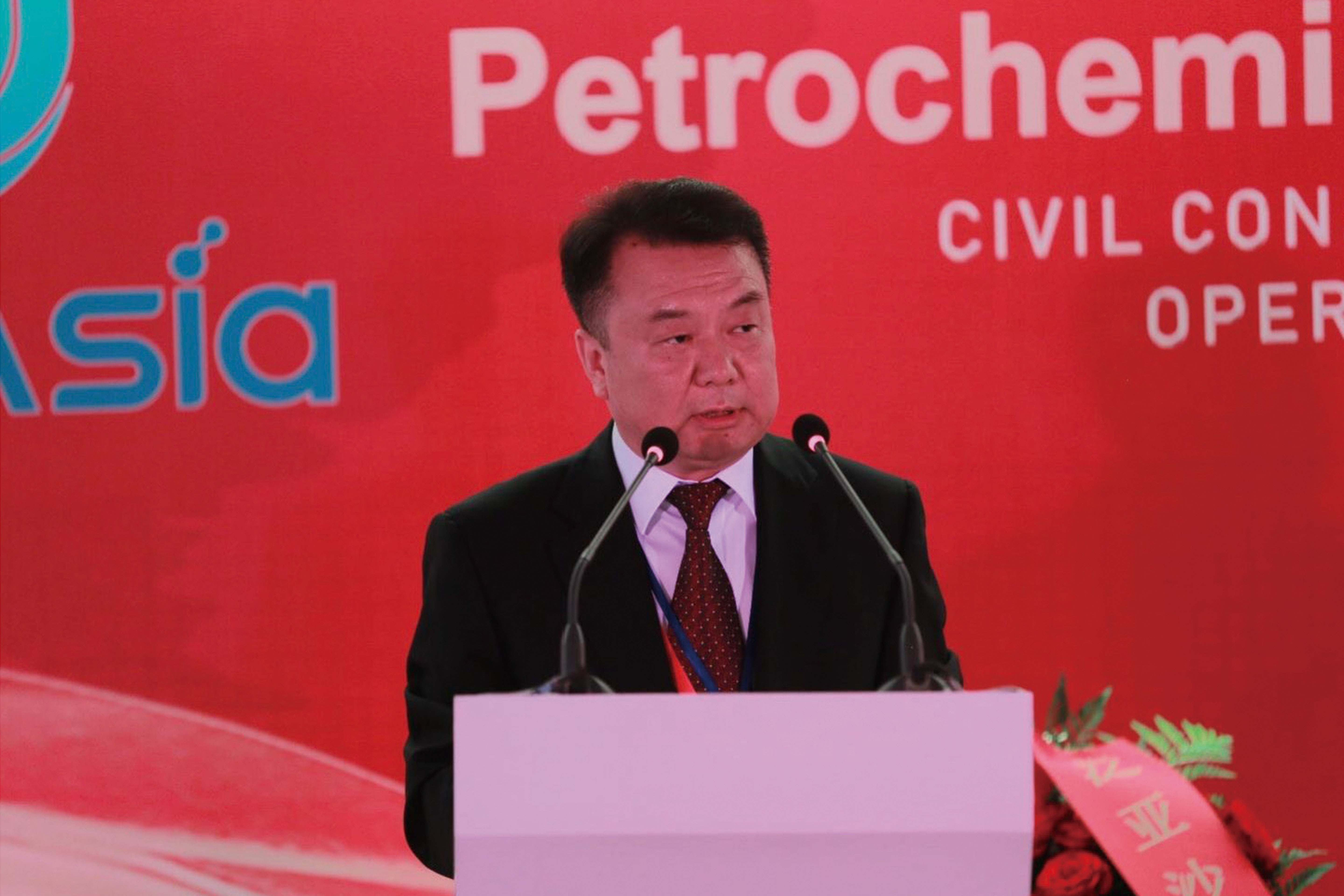 Mr. Zhuo Wenze, Executive Director of Poly Changda Overseas Engineering Co., Ltd., notes, "ThePan-Asia Saudi Project, as a pioneer under China-Saudi Arabia production capacity cooperation,will make significant contributions to Vision 2030 and act as a strategic investment under the Beltand Road Initiative. Poly Group, as a large enterprise group, has investments or businesses ininternational trade, infrastructure construction, scientific and technological development, real estatedevelopment, chemical and energy, etc., with a total asset of about USD240 billion. In 2019, PolyGroup ranks 242nd in Fortune 500. As a subsidiary of Poly Group, Poly Changda EngineeringCompany Limited is a time-honored SOE with fine traditions and special qualification in highwayconstruction EPC contracting. Hereby, we take a clear stand that we will go all out to coordinateand cooperate with all entities, doing our level best for the Project!" 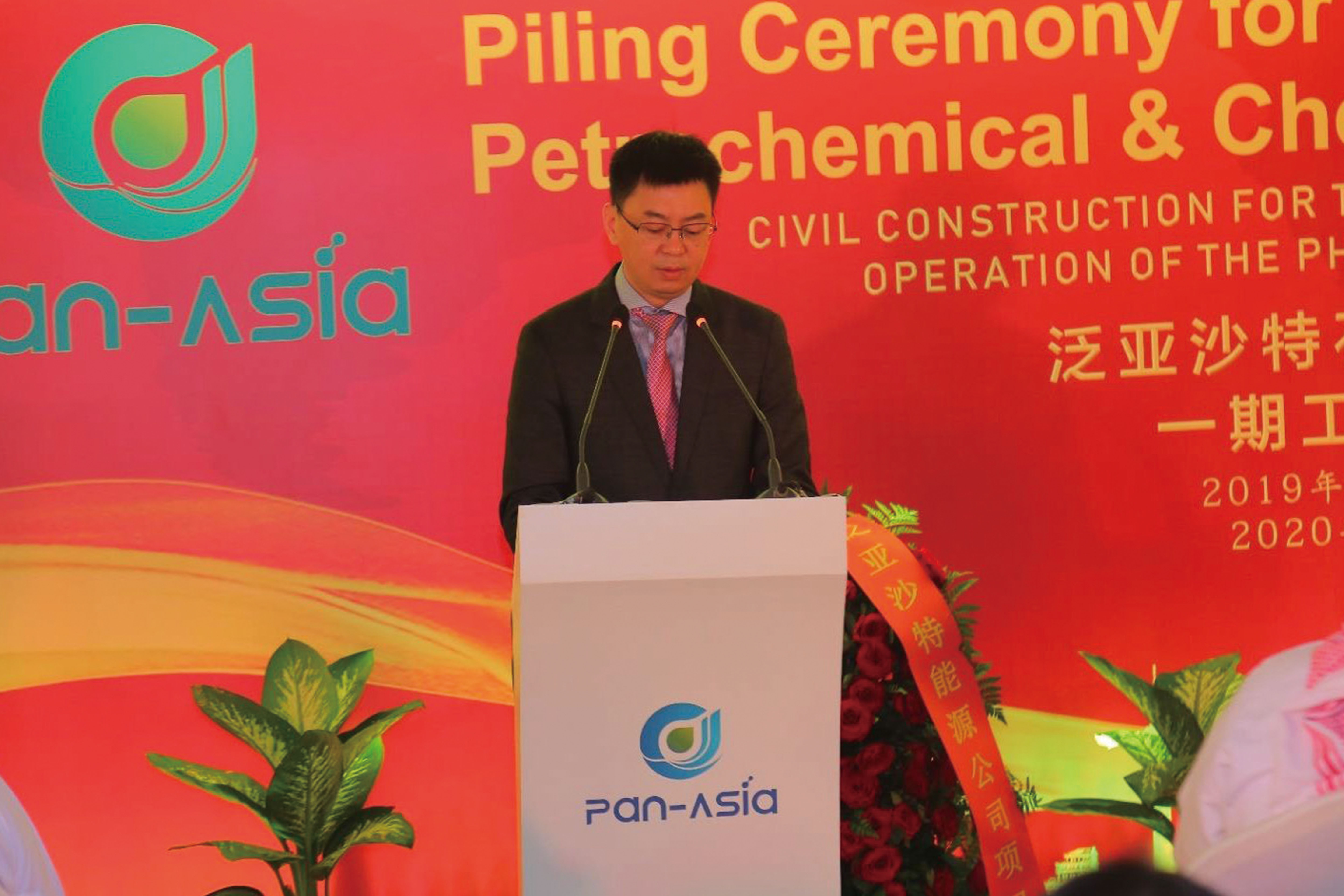 Mr. Zhou Aijun, Director of Business Division of China Harbor, says, "Since 2013 when ChinaHarbor entered the JCPDI, it has undertaken the dredging and filling projects for heavy-lift wharfand artificial island, JIGCC drainage project, commercial port project, and other infrastructureconstruction projects, making many breakthroughs and leaps from scratch. In the future, we willstay true to our mission as the builder of the Projects in Jazan, and live up to Pan-Asia's recognitionand choice of our company with a secured and high-quality project. We also firmly believe that withjoint efforts, the Pan-Asia Saudi Project will surely achieve the construction target as scheduled withhigh quality, be put into production successfully, and become an excellent model for Chineseenterprises entering the Jazan economic city in the future!" 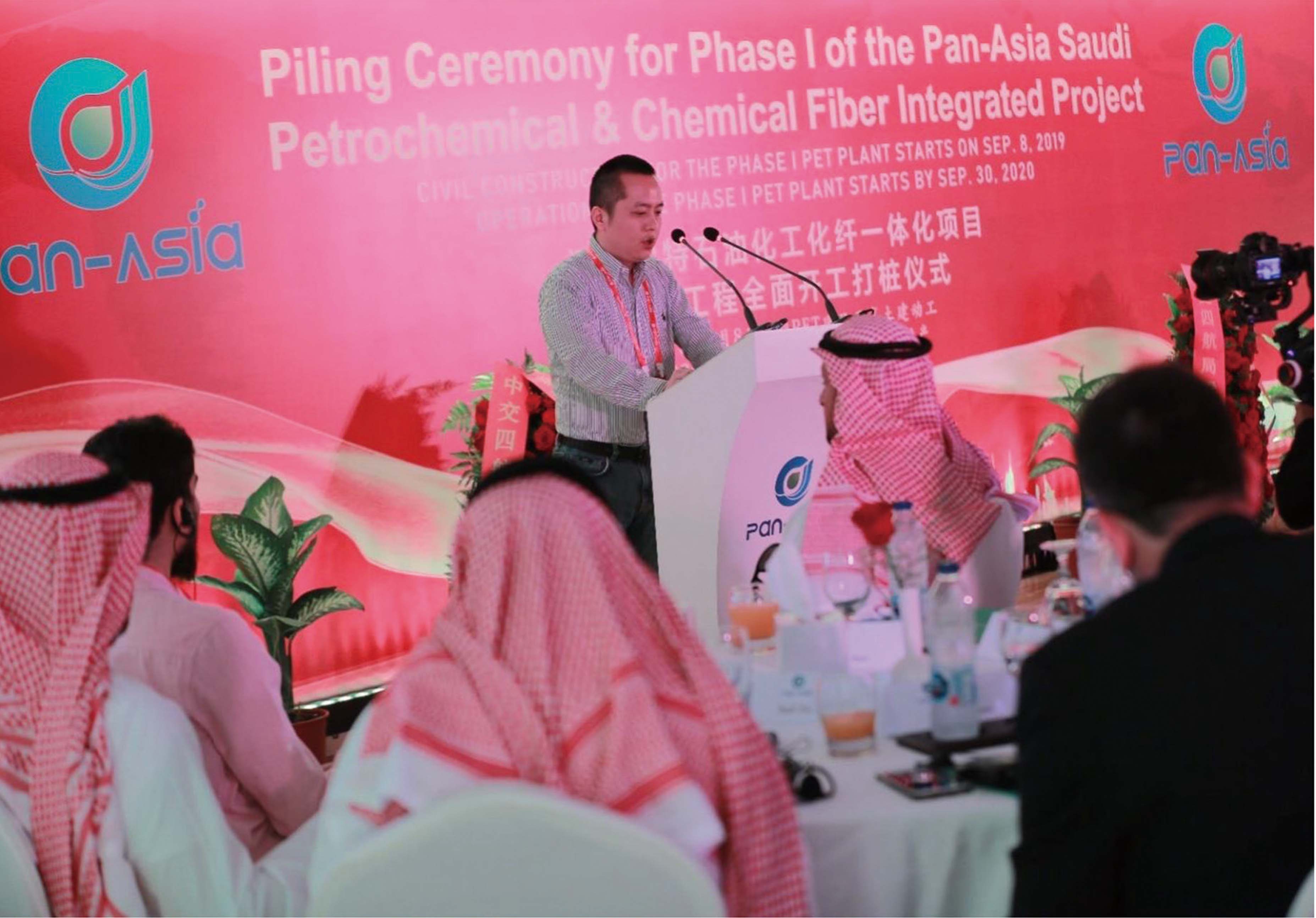 After the speech section, Mr. Ding Jianzhong, Chief Engineer of Pan-Asia Group, leads the guests to thepiling area on bus. Along the way, he introduces the piling vehicles queue, piling construction site, steelcage prefabrication site, and the work scenes of construction workers, showing the efficient and orderly construction work on the site. The bus came to a stop in front of the piling area of the Phase I PET plant’s CP building. At the warminvitation of Mr. Guan Lingxiang, Chairman of Pan-Asia Group, guest representatives step onto the stageto press the launch button together, declaring the official launch of piling of the Phase I PET plant! With enthusiastic music in the background and witnessed by the guests, the first solid pile of the Project is driven into the ground! 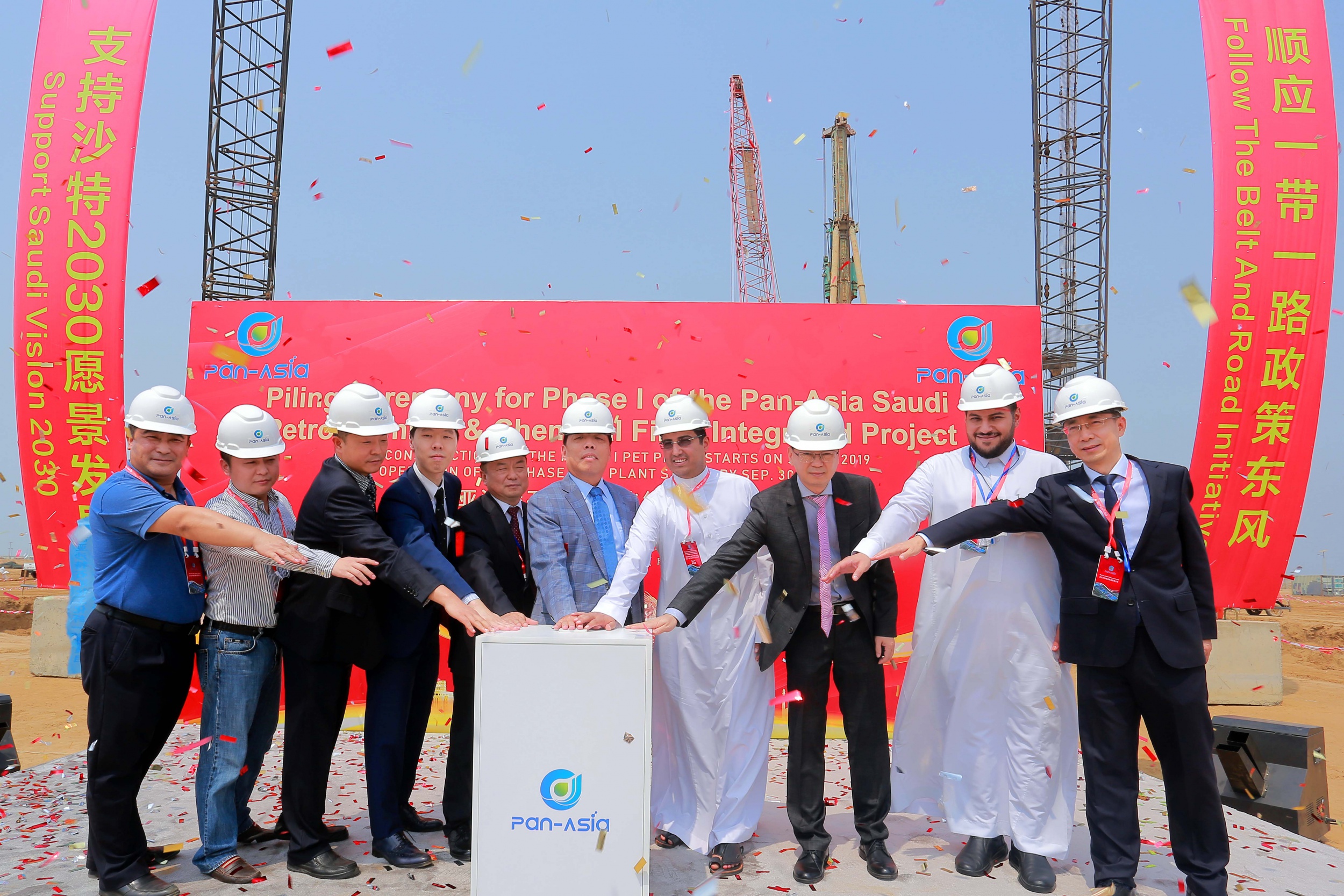 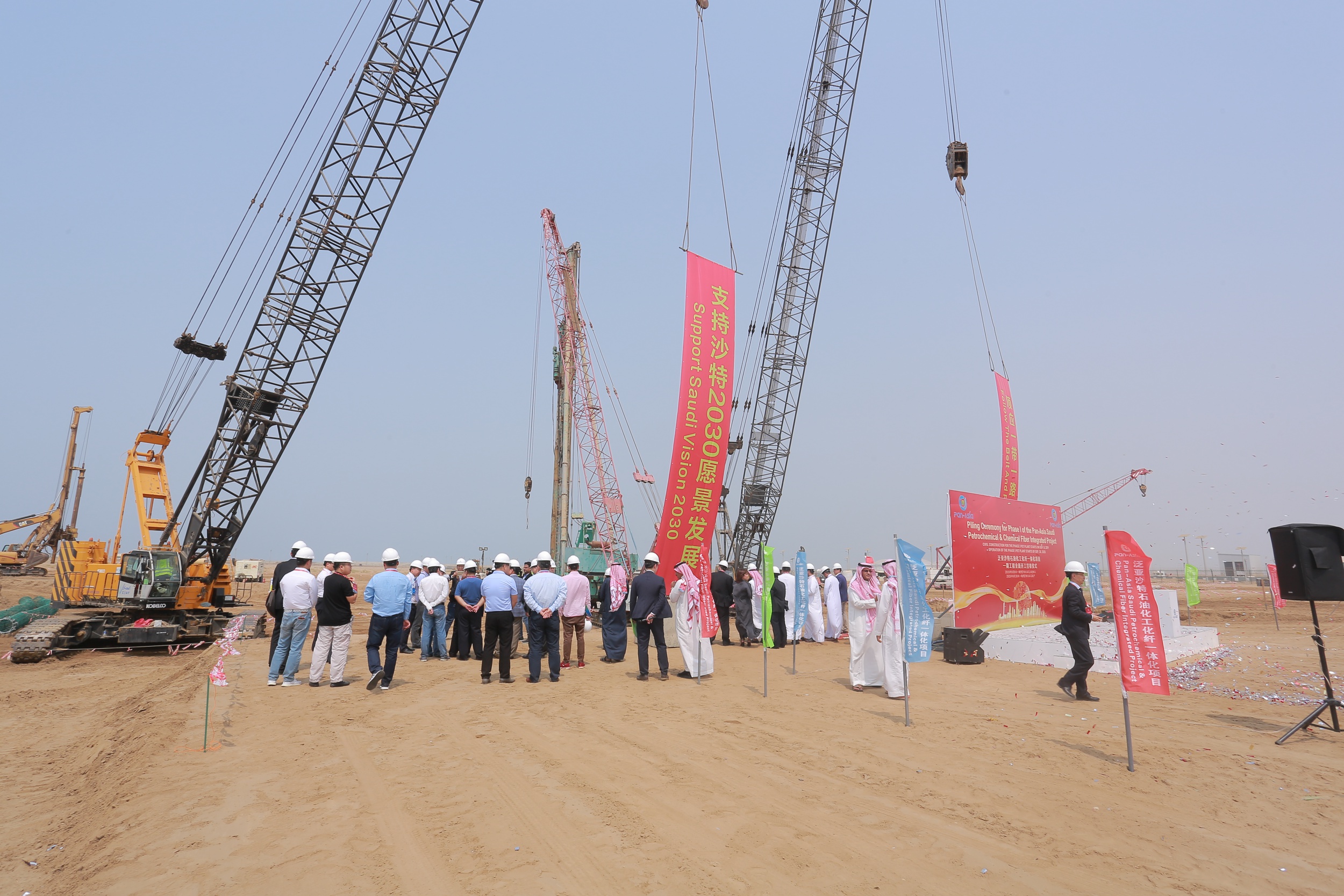 The first pile being laid in the witness of the guests

The launch of piling of the Phase I PET plant is the outcome of unremitting efforts and persistence of thePan-Asia team in the past three years, of full cooperation of project partners, and of strong support ofrelevant competent authorities in China and Saudi Arabia. To this end, we hope that Saudi authoritieswill continue to provide support and help to the Project. In the next step, the Pan-Asia team will workwith the project partners to implement the works in strict accordance with the set plan, in principle of"high standard, strict requirement, and good efficiency", under the premise of "safety first andenvironmental friendliness". We will spare no effort to achieve the goal of putting the PET plant intoproduction by September 30 next year, striving to make the Pan-Asia Saudi Project a model for ChinaSaudi Arabia production capacity cooperation, so as to add more luster to the G20 Summit and realizationof Saudi Vision 2030.

Prev : a mobilization meeting was held between Pan-Asia and Kunlun Next : Pan-Asia and SCI Group Sign Strategic Framework Agreement